Tikves Region is famous for the excellent quality of the grape and the wine which has been made here since ancient times. It was very favorable for grape and wine to which testify numerous archaeological sites evidencing the grape growing and wine making history. The tradition of wine production origins in the time of Alexander the Great and have been continued to present days. Settled on the crossroad of civilizations between the East and the West, this territory endured many influences directly reflecting on grape growing and wine making activities.

Macedonia has rich wine history, and as a wine country, she is very old and very young at the same time. Macedonia has 24 000 ha vineyards and the Macedonian vineyards produce around 236 000 tons of grape each year, which is equal to 220 million liters of wine. Only 5% of Macedonian production of wine is using for home consumption.

Although through centuries Macedonia is famous as a country that makes wine, this country started making quality wine before around 15 years.

Macedonian wine country has its own roots since the 13 century BC. Ancient Macedonians had made wine from the grape they were growing. According to their tradition they mixed the grape with honey because the sugars in honey helped to preserve the wine. The wine was held in amphoras: at the top of them they poured olive oil to stop the breathing and dug them underground, that way the wine remained cold and was maturing accordingly.

Later, during the Roman Empire, Romans were responsible for spreading the vines through Europe. They believed that the wine is a source of fortune and happiness. This period Macedonia was one of the famous wine regions in the Empire.

During Byzantine period (330 – 1453) the vine growing and nurturing continued. Wine presence was growing as the Christianity spread among regions because in Christianity the wine represents the blood of Jesus and it is also part of many Orthodox Church ceremonies (rituals).

With the rise of the Turkish Empire  (XIV-XX century) vine growing and wine production was forbidden according to the Islamic laws. But thanks to the Cristian Churches was never forgotten and extinguished.

At the beginning of 20th century the vines in Macedonia were spread on 30 000 hectares, but at the year of 1914, all of them were completely destroyed by the phylloxera (Phylloxera vastatrix), a small insect that attacks the root and leaves of the vine.

In 1928 king Aleksandar Karagjorgevic decided to plant a vineyard in Demir Kapija and named it Vila Marija, after his wife Maria. The property was bought with the money that she got as dowry from her parents when married with the king. But also there were other noble families who also had vines and produce wine.

After World War Two and the beginning of the socialism, barrels and all other equipment of the winemaking which belonged to different families were nationalized. In that period 13 wineries were founded and they produced mainly bulk wine. On the other hand, 30 000 families owned vineyards and they sold their grape to the big wineries. The restoration of viticulture and growing of vineyards reaches its maximum in 1981 when 38 759 hectares were registered.

In Macedonia, there is a transitional climate from the Mediterranean to the continental. The summers are warm and dry, and the winters are cold. The average annual rainfall is from 1,700 mm in the western mountainous parts to 500 mm in the eastern parts. There are three climatic zones in the country: moderately Mediterranean, mountain and mild continental. The Tikvesh region, located along the valley of the Vardar and Strumica rivers, where most of the grapes are grown, is the largest area on the Balkan Peninsula. The warmest regions are Demir Kapija and Gevgelija where temperatures in July and August very often exceed 40 degrees Celsius. The gentle wind in this region helps not to develop cryptographic infections. Macedonia has nearly 260 sunny days of the year. This helps in the long ripening process where sugar and acids are concentrated in the grapes, allowing rich color and complex aromas in the wines. The intense aroma of Macedonian wines is a result of the combined influence of the Mediterranean and continental climate, with hot days and cool nights, as well as a terroir rich in carbonates and minerals. 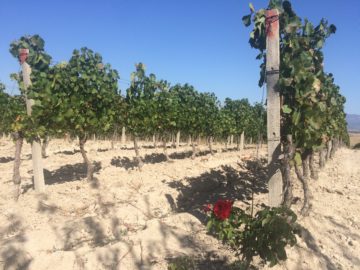